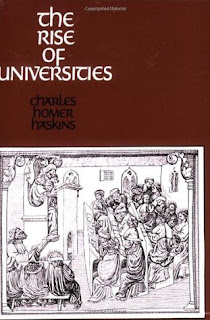 As part of its upcoming 2015 title release, ACLS Humanities E-Book (HEB) will be making available five initial entries in its new ACLS Centennial Series, a selection of books authored by prominent contributors to ACLS to commemorate its founding in 1919. A number of these titles will be included with each release over the next five years, leading up to ACLS’s 100-year anniversary in 2019. (Read  about our founding and history here.)

Slated for initial release later this summer are three books originally published in the 1910s and ’20s: John Erskine, The Moral Obligation to Be Intelligent, and Other Essays (1915); The Elizabethan Lyric: A Study (1916); and Democracy and Ideals: A Definition (1920);  The Rise of Universities (1923) by Charles Homer Haskins, the first chairman of the American Council of Learned Societies; and J. Franklin Jameson’s The American Revolution Considered as a Social Movement (1926). These books exemplify the scholarly achievements that ACLS and its originators have fostered over the last century.

We look forward to bringing additional titles in this series to our readers in the future.